Previous Next
The Mobile Horse

In the era before motorized vehicles, transporting a horse involved riding the horse to its destination. For instance, historians estimate that the famous 18th-century racehorse Eclipse logged 1,400 miles walking to races across England. Wow!

The modern horse trailer that we know today didn’t become a horse transport option until the mid-1950s. And since then, what started as essentially a box on wheels has evolved to sleek trailers complete with living quarters.

So the mobile horse sounds like a relatively modern concept. But is it? 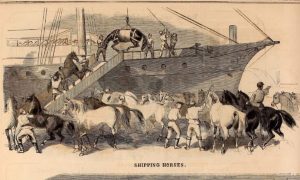 Long-haul horse transport began with the early Greeks over 2000 years ago when they transported horses by boat. Transportation by water continued throughout the ages, especially for war. However, conditions on board were less than ideal for the horses. They were loaded via slings and unloaded by tossing them overboard. Yikes!

Train transport became an option for horses with the expansion of the railways in the early 20th century. However, this mode of travel still left a lot to be desired. I can only imagine how the horses must have spooked and scrambled in reaction to the slack action of the train. You know, when the train stretches out to its most extended length before literally jolting the cars into action; this motion is often accompanied by a loud bang. I’ve worked around trains for many years. This sound still scares the heebie-jeebies out of me! 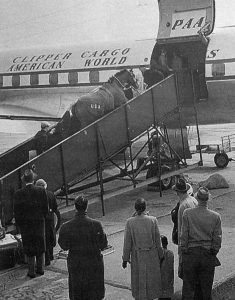 The U.S. Olympic Equestrian Team shipped horses by air for the first time to the 1956 Olympics in Stockholm – ©Photo by Budd

Air transport became a viable mode of transportation in the mid-1950s and is popular today with the jet-setting sport horses that compete in horse shows and races worldwide. The horses are flown in main-deck freighter aircraft, essentially a plane configured for either cargo or a mix of cargo and passenger space. The horses are loaded onto 8’x11′ pallets divided into 1 to 3 stalls. Today, horse owners can choose for their horse to travel coach, business, or first class. Yup, you read that right! Even horses travelling first-class get more legroom!

As a horse owner, the thought of the sounds and conditions that these horses have had to endure over the ages makes me shudder. I can’t imagine my horses willingly being loaded onto a ship or a train. I used to have a horse named Hennessy who was a bit quirky – at home, he was scared of his own shadow, yet he seemed to thrive at horse shows, taking everything in stride. Hennessy would literally pick up his suitcase and walk himself up the ramp into the trailer! But from my experience, he definitely was the exception.

In contrast, Stylish, another of my horses, was an extremely nervous traveller; imagine someone white-knuckling the armrest of the airplane seats or the steering wheel of the car…yup, that was him! And wouldn’t you know it, when we were trailering to a horseshow once, the trailer ramp behind the horses came loose and fell onto the asphalt in the middle of the highway! Luckily, I was travelling behind the trailer. But this was before cell phones were readily available. I watched in horror as Stylish became agitated as the ramp bounced along the highway behind him. I hit my car’s horn, which of course, caused Stylish to panic even more. Fortunately, nothing happened, but I recently read about a similar accident in Europe where the trailer ramp also dropped and that the horse ended up falling out of the back of the trailer. I shuddered when I read this.

So how safe is horse transport?

According to a 2016 Australian study, 25% of horses actually sustain injuries of varying severity during transport.[i] These injuries resulted from scrambling, slipping, or fighting with their neighbours. Sadly, this statistic isn’t too surprising. I mean, imagine a horse standing in a 3-sided stall with nothing more than a bar in front of his chest. The horse stands freely within this stall, with his legs spread slightly to maintain balance as the trailer lumbers down the road. This would be comparable to a person standing on a bus and trying to keep their balance without the aid of a stanchion; you know, the post that passengers hold onto to maintain their balance. Now, imagine doing this without looking out the window of the bus and being able to see that red light up ahead or that curve or knowing that the driver is going to apply the brakes suddenly. Exactly… I’m not sure how many of us could remain on our feet either!

So what can you, a caring horse owner, do to protect their horses during transport?

But lets face it, not all horse owners like the idea of sedation. And what if the horse cannot be positioned in a direction opposite to the direction of travel? For instance, most 2-horse trailers orient the horses in a forward-facing position. And suppose your horse is trailered in a large 12-horse show barn trailer? In that case, it’s literally the luck of the draw for when your horse is loaded, which direction he faces, and how well he gets along with the other horses being trailered.

And what if your horses don’t fit the mould of the young, jet-setting sport horse? What if you’re like a friend of mine who is changing stables and is trailering locally between stables? The trip itself won’t last for more than an hour tops, however, one of her horses recently lost an eye, and my friend is very concerned with how her mare will react to being loaded onto a trailer. And her second horse is a nervous senior with Cushings disease. What’s the best option for horses like these? 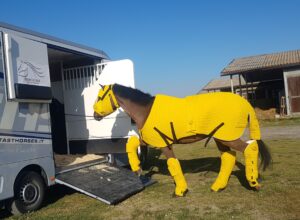 I recently stumbled upon EQUINE ARMOUR, made by Iron Horse, and was instantly intrigued. Cool name, huh! And just like the image that the word conveys, the horses are literally outfitted in an armour of protection that is designed to absorb high impacts.

I contacted Iron Horse to find out more and spoke with Animantia’s Dr. Elena Bajona, a pioneer of equine welfare technology. Under the label of Iron Horse, Elena and her team developed EQUINE ARMOUR, the new multipurpose, total protection for horses that are exposed to risky situations involving physical trauma.

So, what does that mean?

The armour consists of 3 parts:

I plan to recommend EQUINE ARMOUR to my friend because I think that the helmet would protect her mare that’s missing an eye in the event that she panics and moves her head about too quickly. And I think that decking the nervous senior horse out in the full armour would not only protect him but would provide his owner with peace of mind.

So whether you travel locally or nation-wide or internationally to horse shows or races. Or, maybe you’re a less frequent traveller and are contemplating moving to a new stable, or a trip to the mountains for a trail ride, or even to the vet clinic; there are options to safeguard your horse.

As our modes of transport continue to evolve, so does the protective gear available to protect this most precious piece of cargo.

Lara Malmqvist is a copy and content writer for the Equine Industry, based in Foothills County, Alberta, Canada.